Place Vietnam Adventure Agent: Vanora Wanner
In view of the fact that a destructive typhoon paid a visit to Vietnam before I did, I would like to start by thanking the weather gods for the relief. Apparently heavy rains continued to soak parts of the region, but my experience was to be, both literally and figuratively, a sunny one.
Considering Vietnam was on my radar for many years, it was interesting just how little I knew what to expect. Anyway, I love Asia – and Vietnam did not let me down.
Even independent travellers such as myself sometimes like the idea of not having to think or plan! I enjoy travelling with and without companions, but being alone this time around, I considered joining a tour group, realizing budget might come into play, given single supplements can be quite hefty (and can almost pay for another holiday).
Enter G ADVENTURES. “Now the world’s largest small-group (only 10-15 participants) adventure travel company, with more than 650 tours on all seven continents. Built on a foundation of strong core values, G Adventures creates tours that support small businesses and help communities to help themselves. These projects address local challenges, providing benefits for indigenous people, empowering marginalized women, and granting disadvantaged youth access to education, employment, and brighter futures.” Many of their students, some of whom lived on the streets, are now employed as tour guides and transfer drivers/providers, for example. Another considerate philosophy – offering a room-share option so that solo travellers (of which there are a growing number) needn’t be penalized 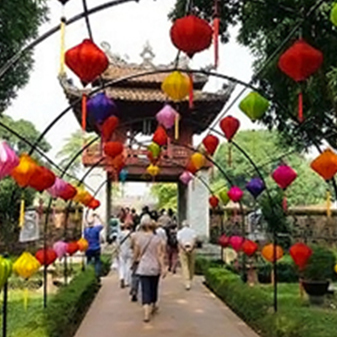 This was welcome news for me, since minimal time is spent in the hotel room anyway. The average age of their customers is currently 42, and they offer travel styles for every type of traveller – Classic, Active, Marine, Rail, Family, Local Living, National Geographic Journeys, 18-to-Thirty-Somethings, as well as Private Groups. I went with Classic – “the sweet spot between independent travel and organized group tours” (perfect mix of group & free time; several meals included). And don’t let the word “adventure” worry you – the Physical Rating options range from level 1 (basically for anyone who can walk!) to 5. 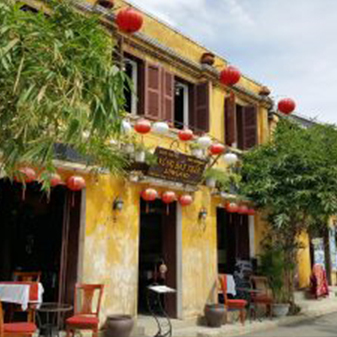 My first stop was HANOI. After easily obtaining my visa on arrival, there were three bus options – the public bus, a city shuttle, and a hotel shuttle. Since my hotel was only a few minutes’ walk from one of the stops, I opted for the middle option ($2). Entering Hanoi’s Old Quarter on a weekend night was like walking into a time warp–during a street party! It woke my senses up. The sidewalks were packed with people sitting at tiny plastic tables & chairs (easier to move around, as this walkway activity is technically illegal!), while countless scooters zoomed around the streets. Due to the large number of scooters, the parked ones monopolize the sidewalks…to the point, pedestrians are left to walk on the edge of the busy streets! Unfortunately, this made it almost impossible for this first-time visitor to navigate my way around this neighbourhood made up of alleys and side streets, where even locals are known to get lost. Aware that petty crime is rampant here, I approached a young well-dressed couple parking their scooter. As English is barely spoken here, they must have felt it would be quicker and easier to just give me a ride, because the next thing I knew, the female handed me her helmet, and I (carry-on luggage in tow) found myself perched behind her date!
This kind gesture was appreciated and a good note to start my trip on. Throughout my journey, I found Vietnamese people to be friendly and pleasant and quite chill. I barely saw poverty – even the cyclo drivers were decently dressed – which I know exists but likely more evident in the rural areas. I was therefore disappointed to learn later on that many citizens are actually unhappy due to communist restrictions, however, there is a lot more freedom here than in China. Because property taxes used to be based on land size, the buildings (particularly in the Old Quarter) tend to be tall and very narrow, so much so that it’s not unusual for hotels to have as few as two rooms per floor, some windowless – one upside of which is no traffic noise!. 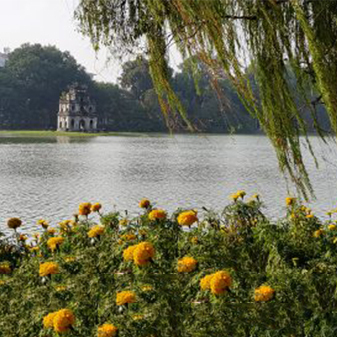 Admittedly I was disappointed that Hanoi & Ho Chi Minh City were just meeting & drop-off points, and no activities (even optional ones) were included, so I researched tour options prior to arriving. I also looked into free walking tours, as I’ve had several positive experiences worldwide in past. The idea behind free tours is that you tip depending on how much you feel the experience was worth. I came across HanoiKids & Saigon Hotpot, and quite liked the idea of helping university students practice their English while they tour me around. And because it’s often one-on-one, it’s also a better opportunity for visitors to properly interact with a local and gain insight into the people & culture. Our tour stops included Ho Chi Minh Complex, Temple of Literature & Hoa Lo Prison(nicknamed ‘Hanoi Hilton’ by the American POWs) – all of which I recommend. (The Water Puppet Show, which I attended on my own, was cute.) And because my student tour guide was flexible, after treating him to lunch, we also wandered around Hoan Kiem Lake & Don Xuan Market. Every now and again, I like to do as the locals do, even if it means the occasional hole-in-the-wall joint. Willing to sacrifice ambience & service, the food, as I hoped, was cheap and delicious! As it turned out, as far as G Adventures roommates go, it was best-case scenario because we often shared that kind of mentality. While Pho is the most famous Vietnamese dish internationally, I learned the fun way that it is just one of many tasty noodle and rice dishes. 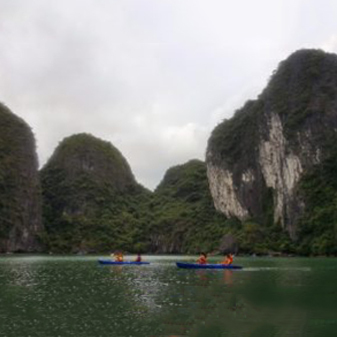 The next few stops were a welcome break between the craziness of Hanoi & Ho Chi Minh City. As we travelled from place to place, I, being used to the chaos (and pollution) often encountered in Asia, was surprised and impressed with how clean and quiet the roads and towns were. Each destination was so different but equally interesting.
After meeting my new travel buddies, it was off to HALONG BAY for an overnight boat cruise, where we sailed by the magnificent, towering limestone pillars and dined on scrumptious seafood. We got to visit a gem of a beach (albeit small and crowded), spectacular caves, and some of us also opted for a kayaking excursion.
We then hopped on an overnight train. It rattled along the tracks, to say the least, but it meant lots of laughs and fun memories. In HUE, we were greeted by one beautiful historical monument after another.
HOI AN (aka ‘City of Lanterns’) was another delight for the eyes. I could hardly believe it when I heard this was one of the areas that was under 5 feet of water! By now, they have obviously figured out how to deal with insane weather, but the fact that there was little to no sign of the recent disaster was mind-blowing. 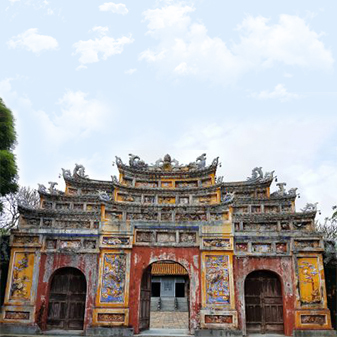 In HO CHI MINH CITY, my walking tour included the Independence Palace, the Central Post Office, Notre Dame Cathedral and – last but not least – the depressing but impactful War Remnants Museum. What was also fascinating were the obvious brothels which (even during the day) were posing as hair salons!
1 Canadian Dollar = 18,000 Vietnamese Dong. I miss the thrill of withdrawing millions, but don’t miss wrapping my head around the conversion!
Going back to the people, I would not have imagined that there are still places in the world where obesity doesn’t exist – but apparently there are! Almost no one was overweight. How is this possible when every meal consists of noodles? It seems food is bought fresh from the market daily – and the Vietnamese love their veggies (and obviously not desserts – not the unhealthy kind anyway). Processed food is not prevalent; the only imported snack food I saw were Pringles & Oreos. (I also noticed that they have free outdoor exercise equipment in the parks – this should be mandatory everywhere!) I was so inspired that I decided to try adopting their healthy way of eating. (My New Year diet has just begun – let’s see how it goes!) 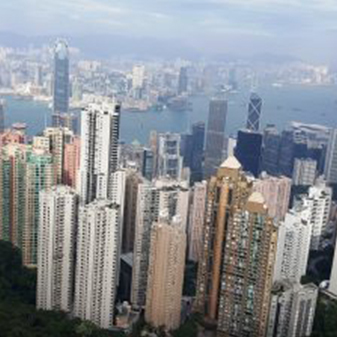 On the way home, I stopped in HONG KONG for the day. My previous quick visits were mostly spent hanging out with friends. Having only carry-on this time, I decided to take advantage and properly explore this exciting city. My hop-on-hop-off tour experience was so incredible and such an eye-opener. The high rises alone are works of art, but HK has so many more spectacular attractions that I hope to return and do it all over again one day.