Found high on many people’s bucket list is the Inca “lost city” of Machu Picchu, and even with such lofty expectations, it certainly did not disappoint. However, our exploration of Peru leading up to Machu Picchu was a very worthwhile adventure on its own.

We arrived into Lima on a nonstop red-eye flight from Los Angeles onboard a very comfortable LATAM Dreamliner Boeing 787-800. The lie-flat business class seats, meal service and amenities were all top notch. Jet lag is nearly non-existant on the enhanced cabin conditions found on the Dreamliner, and being able to fully recline under a cosy duvet, it’s easy to achieve a well-rested state during this nearly eight hour flight. One word of caution, with a 2-2-2 configuration in business class, it’s best not to select the aisle/window combination unless you are very familiar with the person that will be sitting next to you. It’s awkward to have to climb over a fully reclined sleeping passenger if you feel the call of nature in the middle of the night.

Our hotel in Lima was the Radisson Miraflores. It’s well positioned in the vibrant Miraflores neighbourhood, close to lots of restaurants and bars, all within an easy walk. Lima seems to be perpetually grey with overcast skies, so whiling away the hours in an eatery is not such a bad way to experience the best of Lima. We spent the better part of a Sunday afternoon at one of renowned Peruvian chef Gaston Acurio’s restaurants, La Mar Cebicheria. Unknown to me prior to this trip, ceviche is never meant to be eaten after lunch, so this restaurant is only open until 1700 daily (1730 on Fridays and weekends). Decorated in a beach-like theme, and taking no reservations, this is a great place to soak in some of Lima’s oceanside atmosphere:

From Lima, we took a Cruz Del Sur bus to the town of Ica (4.5hrs), to visit the oasis of Huacachina close by. There were many Haucachina uniformed gentlemen stationed within the bus terminal, each of them eager and willing to transport us by taxi for an afternoon of fun and adventure at the oasis. We opted for the dune buggy and sandboarding tour which commenced at 4:00pm and finished around sunset at 6:00pm. Think Mad Max meets Winter X Games and you’ve got a good idea of how we spent our afternoon. 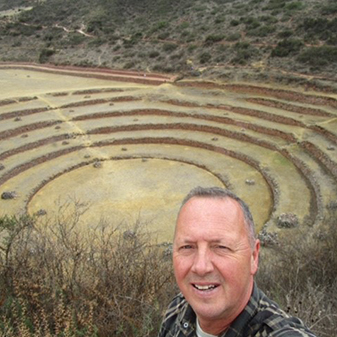 That evening we continued onwards by another Cruz Del Sur coach for about two hours to Nazca, the site of the mysterious Nazca Lines, large geoglyphs most likely created by their namesake culture between 500BC and 500AD. These figures, up to 370m long, both geometric and biological in nature, were created by scraping the surface of reddish soil and pebbles to reveal whitish/grayish ground underneath. Due to the relative calm and arid climate, the lines have been naturally preserved for centuries. They are best viewed by air, but the 45min Cessna tour, with an over-abundance of banking and turbulence, requires calm nerves and is not recommended for those susceptible to motion sickness!

When back on the ground, we took a taxi to view the Cantalloc Aqueducts, a series of asthetically pleasing spirals down to a subterranean water source, also built by the pre-Inca Nazca civilization about 1500 years ago. (Hotel – dm Hoteles Nasca, basic accommodation with a beautiful courtyard and outdoor pool)

From Nazca we took an overnight coach (in the VIP section with 160 degrees of recline!) to Peru’s second largest city, Arequipa. Our hotel in Arequipa was the well-located and smartly designed Palla Boutique Hotel. The hotel allowed us a guaranteed early check-in at 0900, charging 30% of the nightly rate to do so. We were happy to have made this arrangement after a nine-hour bus ride, allowing us to freshen up and hit the ground running, so to speak. The hotel was located in the historic downtown, only a five minute walk from Arequipa’s main square the Plaza de Armas.

At an elevation of 2300m, and surrounded by three volcanoes, Arequipa is also known as the white city, as many structures are built from sillar, a white volcanic stone found in abundance in the area. The city is blessed with a beautiful desert climate, with highs around 23C throughout the year, and only about 75mm annual precipitation, falling mainly January through March. The highlight of Arequipa is the Santa Catalina Monastery, sometimes referred to as a city within the city. Built in stages since 1579, the monastery has a footprint of over 20,000 square metres, and covers an entire city block. Opened to the public in 1970, this monastery was once home to mostly wealthy nuns, the second daughters of upper-class families who paid a dowry equivalent to ten years’ salary for them to live there. Many of these nuns had servants or slaves, until the Vatican Council of 1871 put an end to what the Pope at the time equated to an exclusive social club. Currently home to only a few dozen nuns, the picturesque grounds are full of buildings painted in indigo and shades of ochre. Make sure to employ the services of one of the many multi-lingual guides stationed at the entrance. For a fee of only PEN20 (about CAD8) per group, the knowledge they impart is well worth the investment. 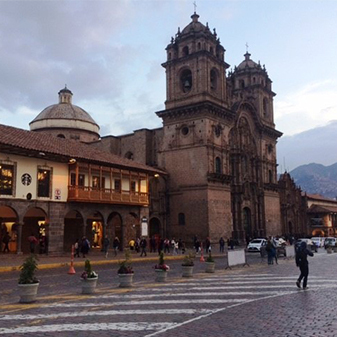 From Arequipa we took yet another overnight coach with 160 degree seat recline to the city of Puno, on the shore of Lake Titicaca, over 3800m above sea level. Puno felt very much like an alpine town, with quite a chill in the air, and oil-filled heaters in our hotel rooms (Hotel Tierra Viva) to blunt said chill. It was good to get most of our acclimatizing done at this elevation, to lessen the likelihood of altitude sickness affecting our enjoyment of our ultimate goal of reaching Machu Picchu.

The big tourist attraction in Puno are the nearby floating islands on Lake Titicaca inhabited by the Uros people. This cluster of approximately 60 islands, built using the lake’s abundant reeds (known as totora), is home to a population of somewhere between 1200 and 2000 Uros. According to the locals, it was the Incas that chased the Uros out on to the lake, around the year 1500, and they’ve lived there continuously ever since. There is much online debate as to how authentic the whole experience actually is. In the mid 1980’s a strong storm blew the island cluster from quite far out in the lake, to a position much closer to the shore near Puno. There is an undeniable “Disneyfication” aspect, with native costumes, “traditional” songs, and the inevitable hawking of handicrafts. Still, if you think Hawaiian Luau and how it relates to current-day Hawaiian lifestyle, this would likely be a similar comparison.

Our final coach journey of this trip was the tourist oriented Inka Express from Puno to Cusco, approximately a ten hour journey with several touristic stops along the way, and a buffet lunch. The stops included the Raya Pass (altitude 4335m), Raqchi (Inca Temple of Wiracocha) and Andahuaylillas (“Sistene Chapel of the Americas”) were informative and really made the longish journey more palatable. Our hotel in Cusco was a new-ish property called Esplendor Cusco. Basically a 3.5 star boutique hotel, it is well located and comfortable, but try to avoid rooms abutting Calle Union, and connecting rooms – unless you want to listen to your neighbours breathing.

Cusco has the historic capital of the Inca Empire from the 13th century until the Spanish conquest early in the 16th century. Although seen as a stepping stone to get to Machu Picchu, designated a UNESCO World Heritage Site in 1983, Cusco is a wonderful destination all on its own. Noteworthy sites include the Cathedral of Santo Domingo, particularly for a painting depicting the Last Supper with Jesus and the apostles feasting on guinea pig (although actually it looked larger, like a chinchilla to me), the San Pedro Market, and the remarkable carved wooden pulpit in the Church of San Blas. Nearby archeological sites worth visiting include Saqsayhuaman, a remarkable fortress featuring huge stones fit together without mortar; Moray, Inca agricultural terraces experimenting with microclimates; and Maras, ancient co-operative salt ponds, still in use to this day.

Our original plan was to do some trekking in the Andes, and with one of our travelling party being a touch acrophobic, we leaned away from a traditional Inca Trail hike and towards a four-day/three-night hike on the Lares Trek. However, as illness befell two of the group by the time we arrived in Cusco, we were left thinking that our prepaid trek would be forfeit, but local tour operator Alpaca Expeditions really delivered in a crunch, and was able to accommodate all four of us on a two-day/one-night abbreviated Inca Trail hike. In the end, the 11km day-long hike from Peru Rail KM104 beside the Urubamba River, arriving at Machu Picchu via the Sun Gate, was near perfection. It made the journey all the more sweet to arrive at the magnificent mountain citadel on foot – one of my life’s greatest experiences! While nearly everyone has seen Machu Picchu in countless photographs, it is hard to convey the sheer perfection of this remote mountaintop archeological site, “discovered” by Yale University professor Hiram Bingham in 1911. We spent a while there after completing our hike, but spent a brief night at a hotel in the village of Aguas Calientes before lining up at 4:00am the next morning to catch one of the first buses back up the hairpin road to the top – first bus runs at 5:30am, gates open at 6:00am. 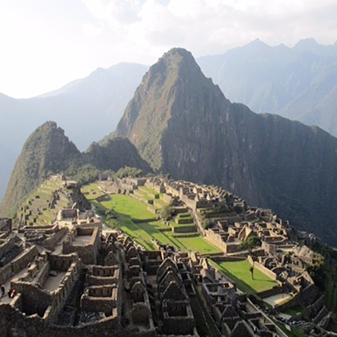 Waking up at 3:30am the day after doing a strenous hike was challenging, but being one of the first wave of visitors on site at Machu Picchu was worth every moment of lost sleep. The air was cool and comfortable, and the grounds were relatively peaceful while our Alpaca guide gave us a two hour familiarization tour. We were then left on our own to roam the grounds until the morning visiting session ending at 12:00noon. If Machu Picchu is on your bucket list, don’t leave it there too long – I saw some very elderly people struggling mightily during their visit – it’s quite the hike up, even from the top of the bus loop.

Everything that followed after our Machu Picchu was basically a step-by-step return home, and mostly uneventful. However, one word of caution… avoid the temptation to use a low-cost carrier in Peru! We were stranded by LC Peru at the Cusco airport for the better part of a day, and that’s not a great way to finish off a wonderful vacation. Fortunately, I had built in a buffer day in Lima on the return, so we were able to get back on track without too much trouble (thanks to Vanora at Forbes Travel!).