France, Italy and Monaco with Fabyo (Part one)

I had never been to France or Italy before, so I chose an itinerary starting in Paris and ending in Rome, to give me a taste of both countries.

Then the two we went to Gordes in Provence, Monaco, Venice and Florence, doing the “in-between” transportation mostly by train or car, with the leg from Nice to Venice by plane. Here’s how it went!

We arrived in Paris on Sunday morning having flown Air Canada from Vancouver with a connection in Montreal. The flights were uneventful and smooth, just the way I like them, with great pod seats on both flights. Once we got to the immigration lineup area we were very grateful for the ″Accès no.1″ the AC purser gave the business class passengers, which gave us access to priority lines which likely saved us about 90 minutes! Once outside the terminal getting a taxi was very easy, and within 40 minutes we were at our hotel.

We stayed at the Hotel Le Mareuil which we both really liked, with excellent location and rates, and incredible service. We were quite early to check in for our room as we were there by 11:15, but they were kind enough to find a room that was just about ready and after waiting for only about 20 minutes (during which they offered us coffee and water), they were ready to show us to it. Our rate included a lovely buffet breakfast as well. 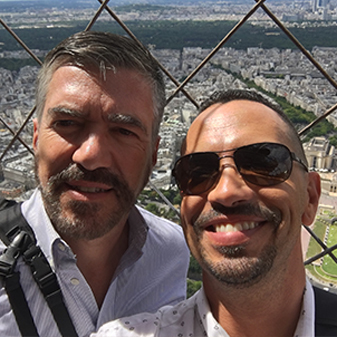 The day we arrived in Paris we had a guided tour of the Eiffel Tower, with skip-the-line access to the second floor and regular access to the summit. This was the first of several tours we booked through Viator, and I was very impressed by every one of them. They were always where we were supposed to meet them, and the guides were very knowledgeable and friendly. Skip-the-line tickets are definitely worth the money!

It was a gorgeous day and we enjoyed the beautiful city views from the tower. We also learned a lot from our young guide, who seemed genuinely happy to be there welcoming us to her beautiful city.

After that we had a long walk back to our hotel through the Gros-Caillou area, Invalides, along the Seine to the posh Saint-Germain-des-Prés area, then across the Pont des Arts to Les Halles, where we finally got in cab and back to our hotel.

On our second day we had a three-hour guided tour of the Louvre, and I’m glad we did that. The museum is HUGE, so I was glad to have a guide take us through some of the highlights and a fun and informative way. We got to see the two most famous ladies at the museum: the Venus de Milo and the Mona Lisa. I could only get about as close as 15 feet from the latter, as there were probably about 300 people there taking photos. After that we walked back to the Eiffel Tower for our evening Seine River cruise with champagne tasting. Our guide on the boat was lovely, although as she was mentioning the landmarks as well as demoing the champagne, I think the former got sold a bit short.

We had intentionally left our third day in Paris open, and ended up going to the Musée D’Orsay, as my partner had never been that before. We had to wait for about 40 minutes to get in and chose the self-guided audio tour option inside, which was well worth the small extra cost.

The museum itself is a beautiful, an old train station, and we both really enjoyed seeing works of Cezanne, Renoir, Monet and Van Gogh.

After lunch we walked to the Champs Elysées and Arc de Triomphe.

France is under high security, so there are metal detector and x-ray machines at every attraction. I’m glad that they’re being vigilant and the extra security did make us feel safer.

On our final day in Paris, we had breakfast and took a taxi to Gare de Lyon for our TGV train ride to Avignon and Provence. 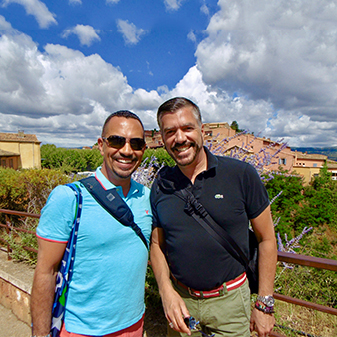 After our great two hours and forty minutes on the high-speed train ride through the French countryside, we arrived at the Avignon TGV station at 12:17, where we picked up a rental car and drove to Gordes. I am so grateful for the Maps app on my phone, which served us well every single day of our trip, helping us with our walks and made driving around Provence so easy!

The route it suggested from the station to the hotel took us through some beautiful and isolated country roads, which I don’t think would have ever happened if we were trying to plan our route on a paper map.

Gordes is classified as one of Les Plus Beaux Villages de France and it is truly breathtaking, starting with the iconic view of the village as you drive in. We stayed at the magnificent La Bastide de Gordes, located half-a-block away from the castle at the centre of the town, and offered stunning views of the Luberon valley. We checked in and immediately went out to explore the town. It rained a bit that afternoon, but it was still warm at 24 degrees. We stopped for lunch and waited for the rain to pass, then off to explore some more, this time in sunshine. I don’t think it is possible to take a bad picture of the town, as everything is so beautiful!

We then enjoyed some time by the pool in the evening and then got ready to go out for dinner. Restaurants close at about 10pm around Provence, so we left around 9pm. A storm had blown in and when we walked out a lot of the restaurants’ outdoor areas were closed, and indoor space was highly sought after. We knocked on the door of one of the restaurants we had seen during the day, and were asked if we had reservation, but got lucky when someone was 25 minutes late for their reservation, so we got a table. We had amazing food and discovered half-litre bottles of wine! 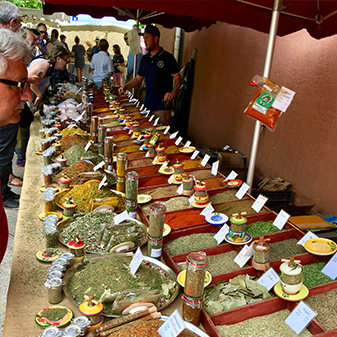 The following day we explored the Luberon and drove to five different villages: Roussillon, Lacoste, Bonnieux, Ménerbes and Fontain-de-Vaucluse. All were incredibly beautiful and the drives from one of the other were 10-20 minutes. We covered a lot of vertical terrain that day as these were all (with the exception of Fontain-de-Vaucluse), perched on hilltops. Roussillon and Ménerbes are also classified as Plus Beaux Villages. All are similar in concept, but also had unique aspects, be it the colour palette, paving stones, etc.

Fontain-de-Vaucluse is where the largest natural spring in France is located. While it has the ruins of a castle on top of a hill, the town is built alongside the river that flows from the spring.

Short easy drives (thanks again to the Maps app!) on lovely roads. One thing to note is given how narrow these roads are (basically one wide lane) and the fact they do not have shoulders, I do not recommend cycling on them at all.

On our third day in Provence we had breakfast and checked out, then drove to Lourmarin, another Beau Village de France, where we walked around and shopped at the local market (it was in Roussillon the previous day – we saw some of the same vendors and artist), walked to the castle, the drove through Aix-en-Provence (which is much larger than we’d imagined!), and onward to Monaco. 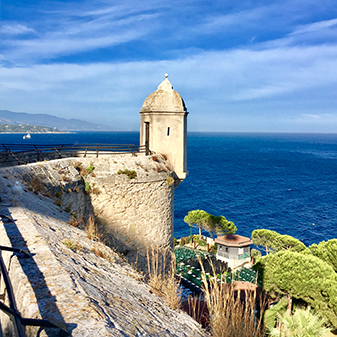 We got to Monaco at about 4pm, checked into the Fairmont Monte Carlo where they gave us a beautiful ocean-view room, then went out to explore the city a bit.

We walked down to the famous Port Hercules and its gigantic yachts, which is surrounded by a different ward called La Condamine, where we got on the little ferry that crosses the harbour. On the side we walked up the hill to Monaco City, “the Rock”, which is another ward in the principality. That’s where the Prince’s Palace, the Monaco Cathedral and Oceanographic Museum or Monaco are located. It’s the most beautiful part of Monaco in my opinion, with beautiful architecture and sweeping view of the Mediterranean. I now understand why they call it the Côte d’Azur. 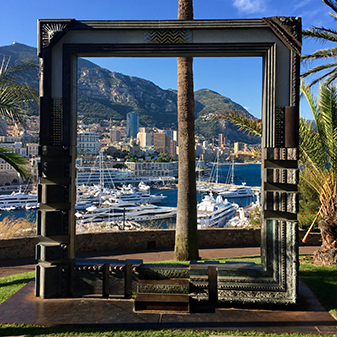 The wealth in Monaco is evident everywhere: massive yachts, expensive cars and brands, expensive restaurants, etc., but people in t-shirts and flip-flops are also seen walking around everywhere. There are supermarkets where good quality food and wines can be purchased at very reasonable prices (€4 for a bottle of rosé!) and there are also reasonably priced restaurants.

It’s a very vibrant place, where outdoor music festivals go on until 2am! Beautiful.