With over 320 sunny days annually, Croatia really is a year-round destination. However, peak season is from the end of June until the end of August when most of the tourists come to Croatia, mostly for the sea and sun type of vacation. If you are planning to visit during these months, the popular spots like Split, Dubrovnik, and Zagreb will be crowded. To get the most of a Croatian vacation, maybe consider travelling during September and early October, or from April to beginning of June when you’ll avoid the crowds.

We flew on Air Transat from Vancouver via Toronto into Zagreb. On the Vancouver to Toronto flight we were on a 737 and it offered decent personal space, then from Toronto to Zagreb we were on an A300 with a lot more personal space. On the A300 they have a few rows at the back of the plane with a 2 -3-2 configuration, I recommend the seats on the 2 side if you are traveling in a pair as there is more room. I wasn’t sure what to expect flying Air Transat to Europe but I was pleasantly surprised. On the outbound we pre-ordered the special Chef meals made by Daniel Vezina. The cost was $25.00 per person, and there were six options to pick from. I had the Chicken Blanquette and my friend had the Duck Confit Lasagna. We were served first and with our dinner we also had cheese and crackers, a dessert and a small bottle of wine. This was all served on china, with real cutlery and a wine glass. Air Transat has a great inflight selection of movies and TV shows to help pass the time. On the return flight we choose to have the hot meals that they offered I had the Chicken Parmesan and my friend had the Beef in red wine sauce, with these meals you get a bun, a couscous salad and a glass of wine.

The brand new Zagreb airport opened in March 2017, beautifully designed and very efficient. It is located about 30 minutes from the center of town. If you are wanting a coffee they have an amazing place called Café Nero.

The car rental offices are located in the airport and easy to find as they are just outside the baggage claim area. It is best to buy the insurance from the car rental agency to avoid large deposit fees charged on your credit card and to secure the peace of mind that comes from having zero responsibility for anything that goes wrong with the car. We prepaid our car before we left Vancouver and it was only $88 for the week. For the insurance and extra driver it was an additional EUR19.00 per day. All the car locations have their vehicles located in same parking lot, so make sure you have patience because things move very slowly when picking up and dropping off your car.

The highways are amazing, they drive on the same side of the road as we do so there is a comfort right away. We used google maps on our phones to get everywhere and it worked out fantastic.

Since we only had one week we decided to stay in the northern part of Croatia. We started our trip when we arrived in Zagreb by driving to Krk. This was around a 3 hour drive along the highway and over an amazing bridge onto the Island of Krk then down to the bottom of the island to the town of Baska. During the summer months the island population goes from 16,000 to 100,000 people. September is a great month to travel there as the crowds are gone and the weather is still very warm. We had temperatures in the mid 20’s during the day and mid-teens in the evening 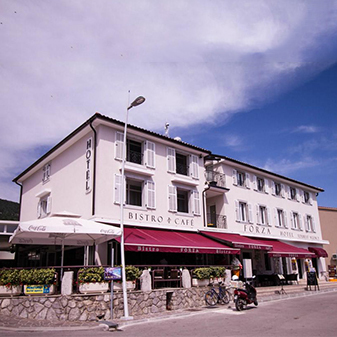 This is a charming family run hotel that faces the ocean. It was once just a restaurant that two brothers started in 1988, they expanded and turned the upstairs into a hotel in 2015. Our room was bright, large with a huge patio that we could lay out in the sun. The location was perfect just steps to the beach, shops, and restaurants. We paid EUR129.00 per night, and that included breakfast daily. They also left home-made chocolates and sparkling water in the room as a welcome gift. At check-out they gave us a tin of their special blend tea and a beautiful chocolate bar to remember our stay.

We spent our first day relaxing and getting to know the area – jet lag can do that to you. The next day we explored the island going to see some of the other towns. Our first stop was Soline Bay located on the Northeastern Coast of the island, the beaches there are said to have medicinal mud, good to help cure a lot of ailments including arthritis. People flock to these beaches and cover their bodies the warm mud. They have solar showers to clean yourself off, although you need to have the 2 Kona coin (you get 30 seconds per coin). It was very windy the day we were there and we only put our feet and legs in.

From Soline, we drove to Malinska on the northwestern part of the island. We fell in love with the beautiful town and stunning pebble beaches with crystal clear water. We had a lovely lunch on the marina before heading off to explore the town of Krk. I would suggest staying at the Hotel Adria for their amazing views of the beautiful bay, and off-season rates starting at EUR66.00 per night.

On the island’s southern coast, Krk town clusters around an ancient walled city. The newer part of the town spreads out over surrounding hills and bays. We spent our afternoon exploring the cobblestone streets in the walled area. I would suggest staying in the Hotel Pinia in the town of Krk, located up on a hill with beautiful views of the sea, and off-season rates starting at EUR144.00.

On day four, we started our journey back up the Island then down the coast toward Novigard Dalmatia. We decided to take the highway on the coast so that we were able to experience the views and we were not disappointed. This was one of the most beautiful drives I have ever been on, the drive takes you high up onto cliffs and low down close to the beaches. We stopped along the way for some lunch at one of the many restaurants in the little towns you drive through. We had the best schnitzel and beer (well – I had beer as I wasn’t driving).

The drive took about four hours in total including a lunch stop. When we arrived into Novigard, Dalmatia we knew we wouldn’t venture far from the small seaside fishing town. It was completely charming and totally relaxed. Our accommodation here was a restored home from the 19th century that was once owned by a photographer. The walls were decorated with photos that he took when he lived in the home. We booked this on Boutique Homes and paid EUR250.00 including the cleaning fee for a 2 night stay. We were met by a lovely woman who looked after the property for her cousin, the home was even nicer then it looked in the pictures! There was a bottle of red wine and some olive oil both made by family friends waiting for us. Once we settled in we went for a walk along the shoreline and to the market to get some provisions. Once we settled in and put some tunes on the Bang Olfsen stereo we were set!

On day six we headed back to Zagreb, this time to stay for a couple of nights. We took the fastest highway and were making a stop in Kutina, about 60 minutes southeast of Zagreb to have lunch with my friend’s aunt and uncle. Croatians are very generous and hospitable people. They served us an amazing dinner that never seemed to end. Most Croatian people live in modest apartments or small homes with many family members. It was really nice to be invited into their home to see how people actually live. 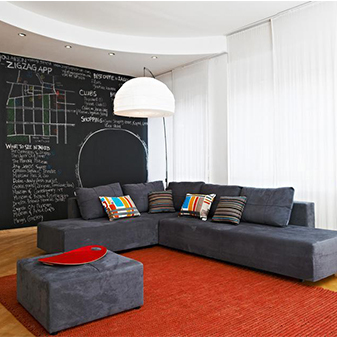 After dinner we were back on the highway heading into Zagreb, another 60 minutes on the highway and we were there. We booked into the Zig Zag Apartments, in the city center on the town square on the 7th floor with a large balcony overlooking the downtown area. We paid EUR79.00 per night for our beautiful studio apartment. They offer many different types of apartments in the surrounding areas -studios, one and two bedroom suites. The wall in our apartment had a painted black chalkboard with a map of all the best things to see and do – from restaurants, bars, coffee shops to museums and galleries. It was very helpful, we were able to mark off a good deal of places in our two days there.

Outside our front door was the Dolac Market, their version of our farmers market. It has been in business since the 1930’s with people coming from all around to sell their fresh veggies, flowers, cheese, fish, meats and local crafts. The whole center of Zagreb is pedestrian zoned, no cars allowed.

We spent our days wandering the city, eating good food, drinking coffee in amazing cafes (The Velvet Café), popping in and out of churches, galleries and stores.

There is so much more to explore in Croatia and I cannot wait for my next trip there!