The Shanghai and Beijing remained on the “must see” list, we also spent some time in Guilin and Xian, two cities I hadn’t visited previously. December turned out to be a good month for our trip, as the crowds were sparse, and the weather was mostly fine.

After our arrival at Pudong Airport, we hopped on board one of the world’s fastest trains, the Shanghai Maglev. It’s only a 30.5km line, but at full speed it reaches a maximum 430km/h, and it covers that distance in about seven and a half minutes. During off-peak hours, the speed tops out at a paltry 300km/h, so the trip takes a little over eight minutes. Suffice it to say, it’s a fun ride. Unfortunately, the line terminates far from central Shanghai, so a cab or subway (another 20 minutes) is necessary from the end of the line.

We stayed at the Swissotel Shanghai, a very comfortable hotel with a fine location next to Jing’an Temple, the oldest Buddhist shrine in the city. Arriving quite late, we didn’t stray far from the hotel our first night, but we stumbled upon a traditional hot-pot restaurant, just around the corner. Although neither the menus nor the staff spoke any English, we managed to enjoy a fine meal through the use of smartphone translation and pointing. Although, my chicken impression failed mightily, and we ended up with a plate full of frogs’ legs instead – they were delicious!

We made good use of the Hop-On, Hop-Off buses, and covered a lot of ground in our three days. The Bund waterfront stroll is a great place to take in the wonderful contrast of colonial architecture and futuristic skyscrapers on the banks of the Huangpu River. Our bus ticket included a sightseeing cruise along said river, which we took one evening, to take in the spectacular city lights. Shanghai is also a great walking city, and we enjoyed strolls through the French Concession, Nanjing Road, Xintiandi, and in and around Renmin (or People’s) Square. One major highlight was a trip to Shanghai Circus World, where we were treated to a show to rival any Cirque du Soleil show you’ve seen.

From Shanghai, we flew southwest to Guilin. If you’ve ever wondered where the Chinese took their inspiration for those landscape paintings featuring jagged mountains alongside winding rivers, well this is the place. The city itself is quite small by Chinese standards, with a population of about 1 million in the city proper, closer to 5 million in the metropolitan area. Being in the southern part of the country, we were treated to temperatures around 20C most days, a welcome treat in the month of December. 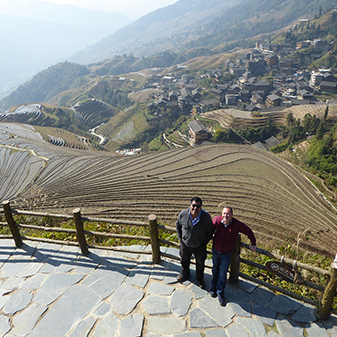 We stayed at a charming Chinese hotel known as the Guilinyi Royal Palace. While it would likely only reach around 3-star status for service and amenities, its unique location in the middle of the Guilin Botanical Gardens, and traditional Chinese architecture made for a very memorable stay. The front desk staff were exceedingly helpful, and they were able to arrange for us a city sightseeing tour by taxi including the Reed Flute cave, along with a Li River cruise (absolute must), and a full day trip to the Longsheng rice terraces. Perhaps owing to our low-season visit, we found all of these excursions exceedingly easy to organize, and at very reasonable prices.

While our primary reason for visiting Xi’an was to observe the Terracotta Warriors, we found ourselves quite impressed by the city itself, and wished that we might have been able to stay a day or two longer. Our hotel in Xi’an was the Grand Mercure on Renmin Square. This hotel was just one of four Accor hotels all grouped together in a convenient location. The bedroom was cozy and quiet, the buffet breakfast was superb, and once again the front desk staff was able to arrange a fine and personable private taxi driver to take us to see the Terracotta Warriors the morning after our arrival. 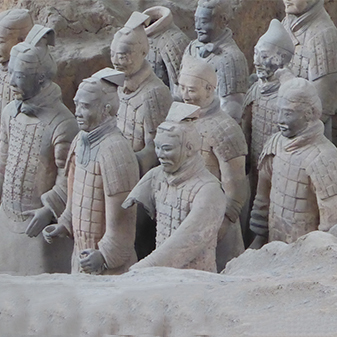 Again, we arrived a bit late into Xi’an, and the temperature was nearing the freezing point, but we wanted to explore a bit before turning in for the night, and we were a bit peckish too. We found an awesome little hole-in-the-wall restaurant, with windows all steamed up, that served us Rou Jia Mo, a “Chinese hamburger” resembling pulled pork served in pita, along with heaping bowls of Qishan noodles. This was likely one of the food highlights of our entire two weeks in China, and it was even more wonderful since it was completely unplanned.

A visit to the Terracotta Warriors is something never to be forgotten. Discovered by a farmer in 1974, the sheer scale of the excavations, the main pit alone containing over 6,000 life-sized unique figures, is quite astounding. The funerary sculptures include armoured warriors, infantrymen, cavalrymen and their horses, chariot drivers and archers. Along with the excavated pits, there is a museum containing special pieces, including the magnificent Qin bronze chariots, half size scale models of horses and chariots forged from bronze, silver and gold.

It is often said of Beijing that you will never see a blue sky there – but we did, for two glorious crisp December days! Unfortunately our good luck didn’t hold for our entire five night stay, and by the day we left, there was quite a serious smog hazard.

Arriving in Beijing, we made one tactical error, but it didn’t end up costing us too much. We arrived without having the name of our hotel written out in Chinese characters. Since we were staying at what was formerly, until a month prior, known as the Raffles Hotel, just a stone’s throw from Tiananmen Square, we assumed all taxi drivers would understand where we were going – wrong. We took the airport express train into Dongzhimen Station, and encountered a taxi rank where none of the drivers spoke English. After about a ten minute discussion with lots of gesturing and shrugs, one of the drivers indicated he knew our destination, and that we should go with him. To make a long story short, we ended up near our hotel (within a kilometre or two), at another hotel (coincidentally, the one I stayed at over ten years prior) and by threatening to call the police, ended up paying only about double what we should have. It was still likely less than a taxi all the way from the airport, and a bit of an experience. Lesson learned – and maybe we should spring for a roaming package for our mobile phones sometimes.

Our hotel for five nights was the Beijing Hotel NUO, until very recently the Raffles Beijing, on East Chang An Avenue, just steps away from Tiananmen Square. We stayed in a very spacious executive junior suite, and we loved having the extra living space for a longer stay. The hotel seems to be experiencing a few kinks due to the management switch-over, and it is nearly impossible to find updated information about the hotel on the internet at this time. One odd thing was being approached on a few occasions by hotel staff asking if we were interested in having a massage. 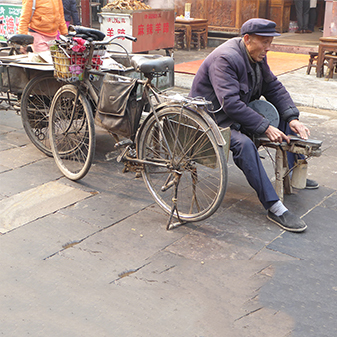 Having five full days in Beijing gave us plenty of time to explore the city in depth. We spent our first day in and around Tiananmen Square, including Mao’s mausoleum (you have to check your camera beforehand). There was a lot of security, just to get onto the Square, including the nearby metro stations. I was carrying a bottle of water, it didn’t get confiscated, but I did have to drink it before I was allowed to pass. We also spent the afternoon at the site of the 2008 Olympics, where it was great to see the Bird’s Nest stadium up close.

We discovered a “locals” tour out to the Great Wall of China (Badaling) departing the next morning. The full day tour only cost us the equivalent of $22CDN, including our entrance fee, lunch en route (along with obligatory shopping – although minimal), and the two hour bus ride each direction. This was our second clear blue sky day, although up in the mountains there was a stiff and very chilly wind blowing. We had about two hours to explore the wall, and we chose to head off in the direction away from the the cable car and the largest crowds, mostly to take advantage of the afternoon light, but with the unexpected benefit of nearly having the whole experience to ourselves! We literally crossed paths with only a few dozen other people, in what is traditionally the most heavily visited section of the wall, due to its proximity to Beijing. Again, an advantage of travelling outside peak season. 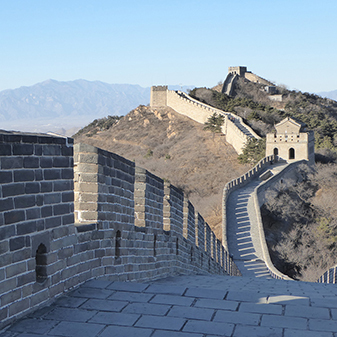 We spent nearly an entire day poking around within the Forbidden City, also known as the Imperial Palaces of the Ming (1368-1644) and Qing Dynasties (1644-1911). It’s huge, and there’s a lot to see, and our favourite structure was likely the turret located at the southeast corner of the sprawling grounds. Each turret on the four corners of the walled city has 9 beams, 18 columns and 72 ridges, all assembled in fascinating fashion, allegedly fashioned after crickets’ cages. The great halls and courtyards are awe-inspiring, but the inner courts which housed various members of the Emperor’s extended families, including concubines, are all very intriguing and capture one’s imagination of how life might have been centuries ago.