This report is based on her most recent escorted tour to Southern Africa, earlier this year.

I arranged this private tour for 8 clients and was hired as the tour guide to accompany the group. Some of the clients had not travelled to Africa and were a little apprehensive about the trip. After a few days we all felt very safe as we had fabulous local guides in all the places we visited.

We arrived in Harare, Zimbabwe in April this year and spent three days at the York Lodge. We did some local sight seeing as well as taking in part of the Harare International Festival of the Arts which happened to take place while we were there.
Our trip included 3 safari camps, one in Zimbabwe and two in Botswana. 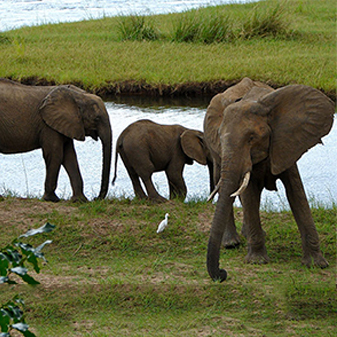 Our first camp was in the Mana Pools National Park, “Ruckomechi Camp”. It took one and a half hours by a Sefofane light aircraft to fly from Harare to the airstrip close to our camp. All the camps are on an all-inclusive basis with two safari drives every day.

Ruckomechi Camp is located on the banks of the Zambezi River and can accommodate guests in ten spacious en-suite tented units. The camp is environmentally friendly, with solar power used for hot water and lighting.

Wildlife viewing is excellent, with large concentrations of buffalo and elephant to be found along the river’s edges, while predators such as lions, wild dog, leopard and cheetah are often sighted.

From Ruckomechi Camp, we took another small aircraft to fly to Victoria Falls for two days before we continued our journey to Botswana. 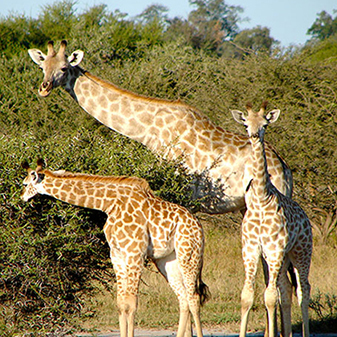 At Victoria Falls, we stayed at the historic ‘Victoria Falls Hotel’ which was established in 1904. At that time, it was one of the world’s finest hotels, and is situated within walking distance of the falls. With its Edwardian architecture and old world charm, it still reflects the gracious style of a bygone era.

The Victoria Falls are magnificent and are 1700 meters wide. The huge spirals of spray can be seen 30 km away. David Livingstone discovered the falls in 1855 and named them after his queen. The local name is Mosi-Oa-Tunya, “the Smoke that Thunders”.

Our journey continued by light aircraft to magnificent Botswana and to our next safari camp, the ‘Kings Pool’ in the Linyanti Wildlife Reserve.

The camp overlooks the oxbow-shaped Kings Pool Lagoon and the Linyanti River to the north. It is one of the most luxurious camps in Botswana, and we stayed in very comfortable tents overlooking the hippo filled lagoon in front of the camp. Game viewing is incredible with a good population of impala, kudu, zebra, giraffe, waterbuck, buffalo and very large elephant gatherings.

A few days later a short flight took us to the second camp, located on Mombo Island in the northern part of Botswana, the “Little Mombo” in the Okavango Delta. 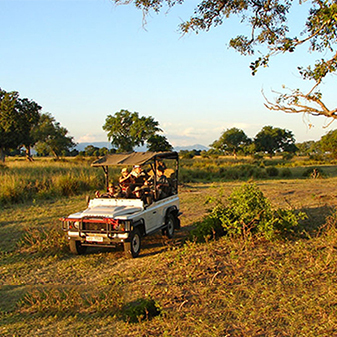 After observing incredible wildlife for several days, we continued our journey to South Africa where we took the famous “Blue Train” from Pretoria to Capetown. Leaving Pretoria at 9am, we arrived Cape Town the next day before lunch.

A journey on the Blue Train is an unforgettable experience. It is a luxurious voyage on wheels. Passengers are treated to amazing views of the diverse African landscape before reaching Cape Town, South Africa’s most cosmopolitan city.

From our hotel, the “Cape Grace”, situated at the Victoria and Alfred Waterfront, a vibrant part of the city, we were close to most of the city’s famous attractions. After a city tour we enjoyed a half-day trip to the top of Table Mountain which is a must-see and from where we all had incredible views of the city and surrounding landscapes. Other attractions include Kirstenbosch Botanical Garden, Cape of Good Hope, Robben Island, Camp Bay and much more.

We finished our trip with a couple of days in the Cape Winelands. Dominated by the Indigo Mountains, the Cape Winelands are situated within easy reach of Cape Town in the Stellenbosch, Paarl and Franchhoek districts. Our wine tastings in this region were another of the many highlights we experienced during our journey.