When an opportunity presented itself to visit Canada’s North in early January 2019, I didn’t think about it twice. I knew this trip would be an experience like no other!

The “Long Night” experience was organized by Air North and began on Jan 4th when we took flight from Vancouver to Whitehorse. The flight took what seemed to be the shortest two and a half hours ever, and we all headed to MacBride Museum of Yukon History where we met fellow adventurers and members of the Yukon travel trade. The welcome reception included cultural showcase sponsored by Yukon First Nations Culture and Tourism Association as well as opportunity to taste delicious local whiskey. After the reception we headed to Takhini Hot Springs located about 30 minutes from Whitehorse. We spent overnight at Coast High Country Inn. 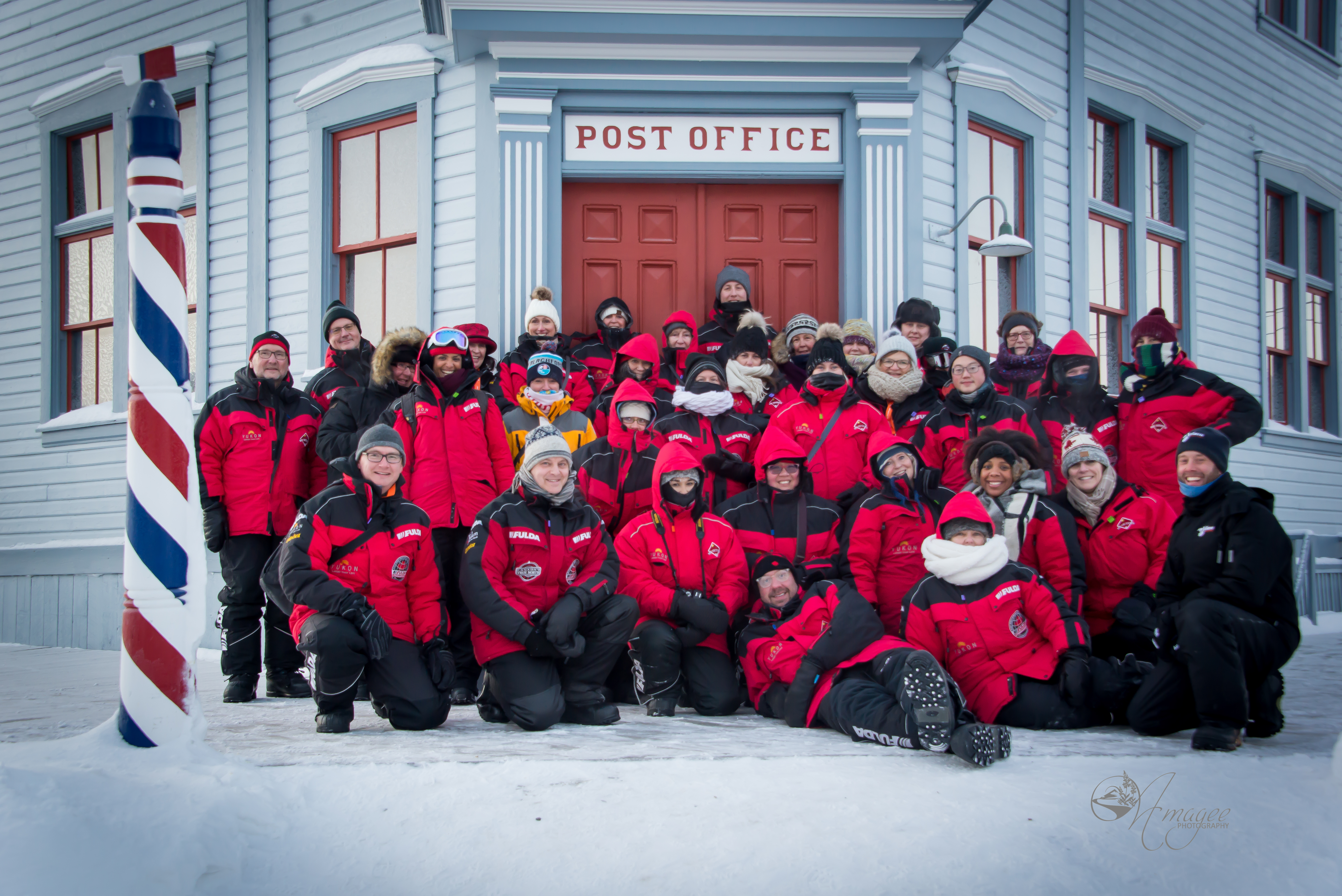 As you can imagine the temperature in Yukon in January was “well” below zero. Early morning on Jan 5th we geared up in Arctic Clothing provided courtesy of Tourism Yukon and visited Yukon Wildlife Preserve – a place where wild animals can be rehabilitated and cared for. The preserve has over 600 acres and we drove through it by bus making stops and walking around admiring the animals, taking pictures, enjoying the scenery and getting used to the freezing cold and extremely crisp air. At the preserve, you get to see caribou, muskox, lynx, arctic and red fox, elk and moose. After the visit to preserve we headed to the airport to board our flight to Dawson City.
The flight was about 90 minutes and the temperature in Dawson City was about -41C compared to Whitehorse being about -24C. To say that you could certainly feel the difference is an understatement. We checked in to Downtown Hotel and all geared up joined a historical walking tour of heritage buildings from the Klondike Gold Rush era hosted by Parks Canada. We went to see an old theatre where we enjoyed the performance of two violinists (no heating inside – performance was short but amazing), as well as a bank and the post office. We learned about the Yukon gold rush and the famous Percy de Wolfe, a dogsled mailman who would pick up and drop off the mail in Alaska by dogsled. His route took four days for each trip and we were told he never lost a single piece of mail. We were given a postcard we could mail to anywhere in the world that would be carried on dogsled as part of the Dawson annual Memorial Mail Race that takes place in March every year. I have sent one to my family and can confirm that it arrived! We also made a visit to Danoja Zho Cultural Centre where we watched a short documentary about Tr’ondek Hwech’in (local native tribe).
After the tour and return to the hotel, we were invited to join a 5K run/walk hosted by Run Dawson. Apparently, Dawson City was the coldest place on earth that day and it was -42C! Let’s just say, I will not forget this experience! We took a quick break at the hotel, popped into the saloon for a Sourtoe Cocktail. We joined the dinner at the Klondike Institute of Art and Culture Ballroom later on and since the night was not over, yet we spent a couple of hours at the Dawson City community Ski Hill searching for the Aurora Borealis (northern lights).
Next morning we packed, had breakfast and jumped on a flight to Inuvik via Whitehorse. We joined the local sunrise festival with activities where we had an opportunity to taste a variety of local food. Kids were skating on a large ice rink or sliding down the ice slide while others were enjoying the food or admiring ice sculptures.
A visit to Western Arctic Regional Visitor information center was well worth it. We admired the beautiful displays of animals and history of the community of Inuvik and were presented with an Arctic Circle certificate – the proof that we crossed the Arctic Circle. Dinner concluded at local restaurant Alestina’s with delicious food and stories to remember.
Next day’s trip took us to Aklavik – remote village we accessed via ice road. In Aklavik we visited a local woman named Anne and her family, who welcomed us into their home. I have purchased a beautiful beaded pen holder created by Anne, while others bought knives, gloves or various other souvenirs. The visit was short but enjoyable as they told their life stories and answered all the questions we’ve had. The driver told us the story about the Mad Trapper and showed us the cemetery where he was buried.
The best was yet to come though! 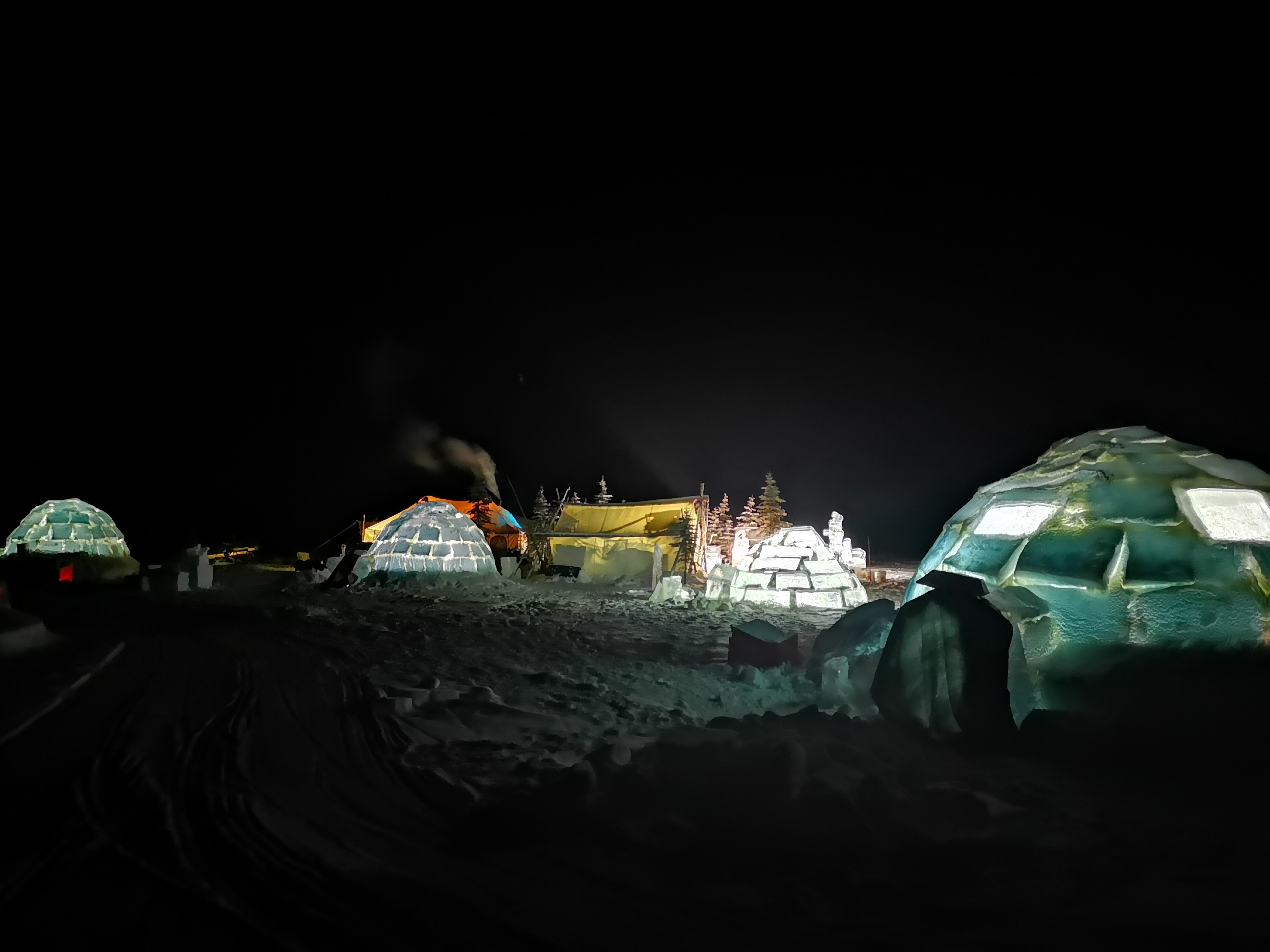 What do you do when you want to truly experience the great Northern Arctic Experience? You join Tundra North Tours’ Kylik Kisoun Taylor and spend the night in an igloo! After leaving the bus, we took a short-guided walk to see an icehouse where goods/food can be stored year-round. We were picked up by a snowmobile and taken to the igloo village that was built on a lake. The night spent in an igloo was an unforgettable experience and I would recommend it to everybody as well as doing it again anytime. The village had three igloos that were used for sleeping, one tent to relax/lounge and a cooking tent as well as a heated bathroom tent. They built an ice bar and a fire pit with chairs around it in the back as well. 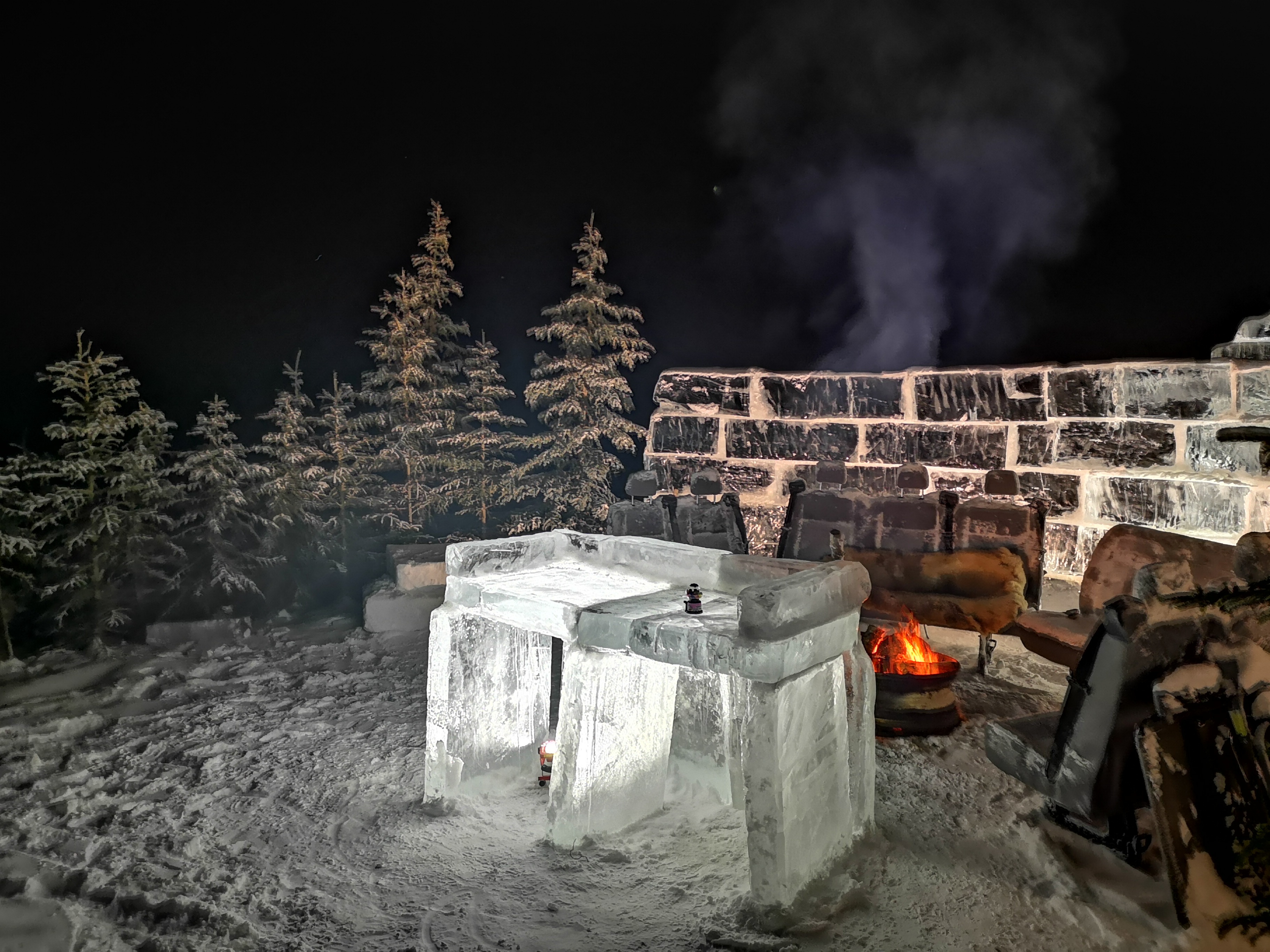 Kylik and his team showed us how to build an igloo and cooked a delicious dinner of local fish, Eskimo donuts and a soup. We had a presentation of Arctic games and activities locals would play to pass the time in the long cold winter days. We tasted Arctic char and a muktuk (beluga whale). We spent the night around the campfire eating ice cream bars, as everything else instantly froze and ice cream made sense.

Afterwards, everybody except Fiona (my igloo mate) and I went to bed. I decided to postpone that as long as possible since I could not imagine the laying in the freezing space not being able to sleep. We had fun taking pictures and videos, eat ice cream and enjoyed the beautiful Aurora dance for hours. When we finally called it a night we taken all the heavy Arctic gear off bundled up in a sleeping bag (the sleeping bag was placed on heated blanket plugged into a generator) added few hand and feet warmers, covered our faces had lots of laughs and went to sleep. The only part of my body that was cold when I woke up was my nose since it was sticking out of the balaclava. Sleeping in an igloo was a great experience, but waking up in one, the next freezing morning, was another. By the time I got out of the sleeping bag and put all my gear on and climbed out of the igloo my hands were completely frozen! 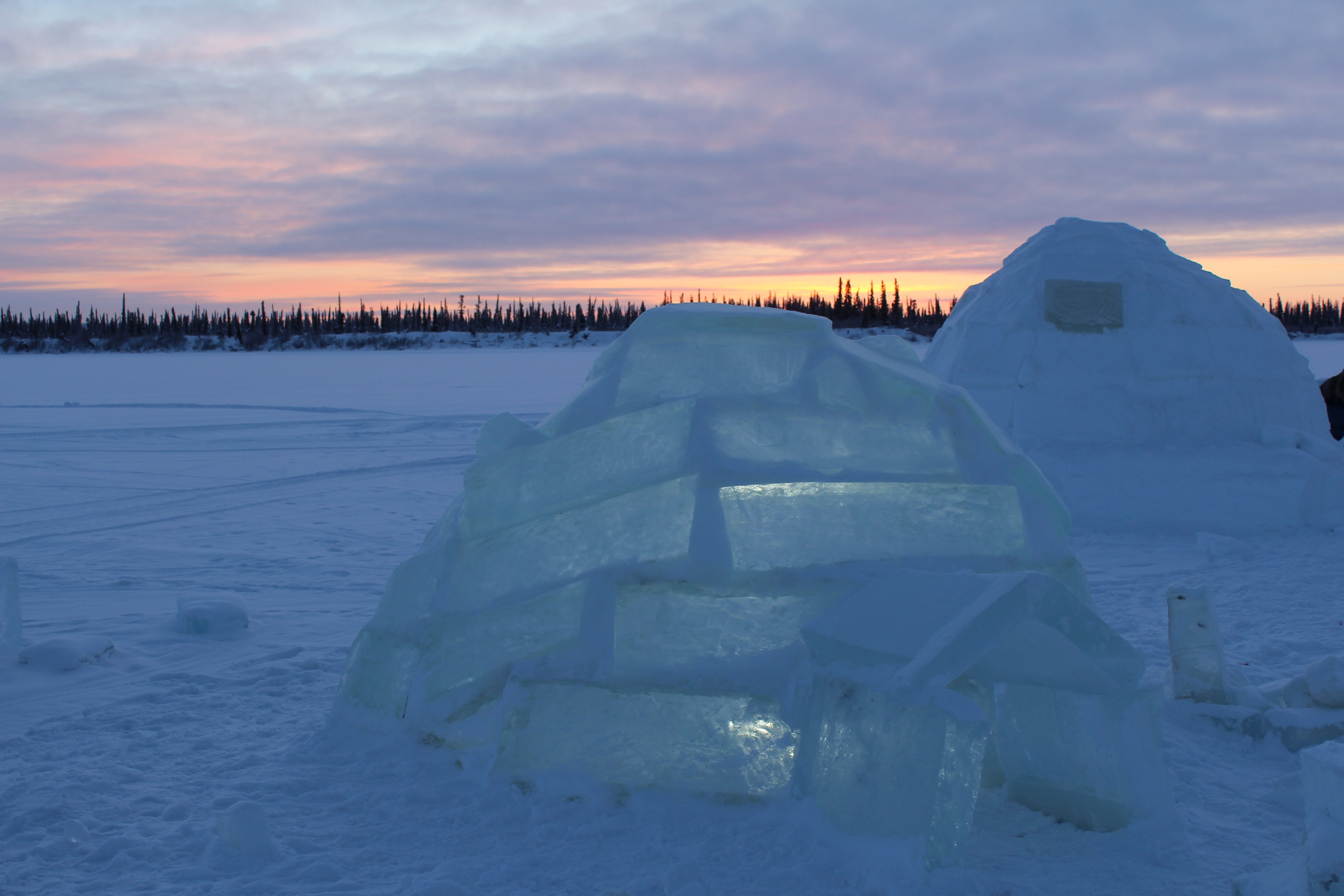 On our last day, we took a day trip via the road less travelled - the new highway to Tuktoyaktuk, a small community of less than 1000 people and the famous polar sea – the Arctic Ocean. The forever winding road looks magical and all you see while on the highway are stunning pingo hills and crystal white treeless tundra with the Arctic Ocean at the end. Truly an unforgettable experience! 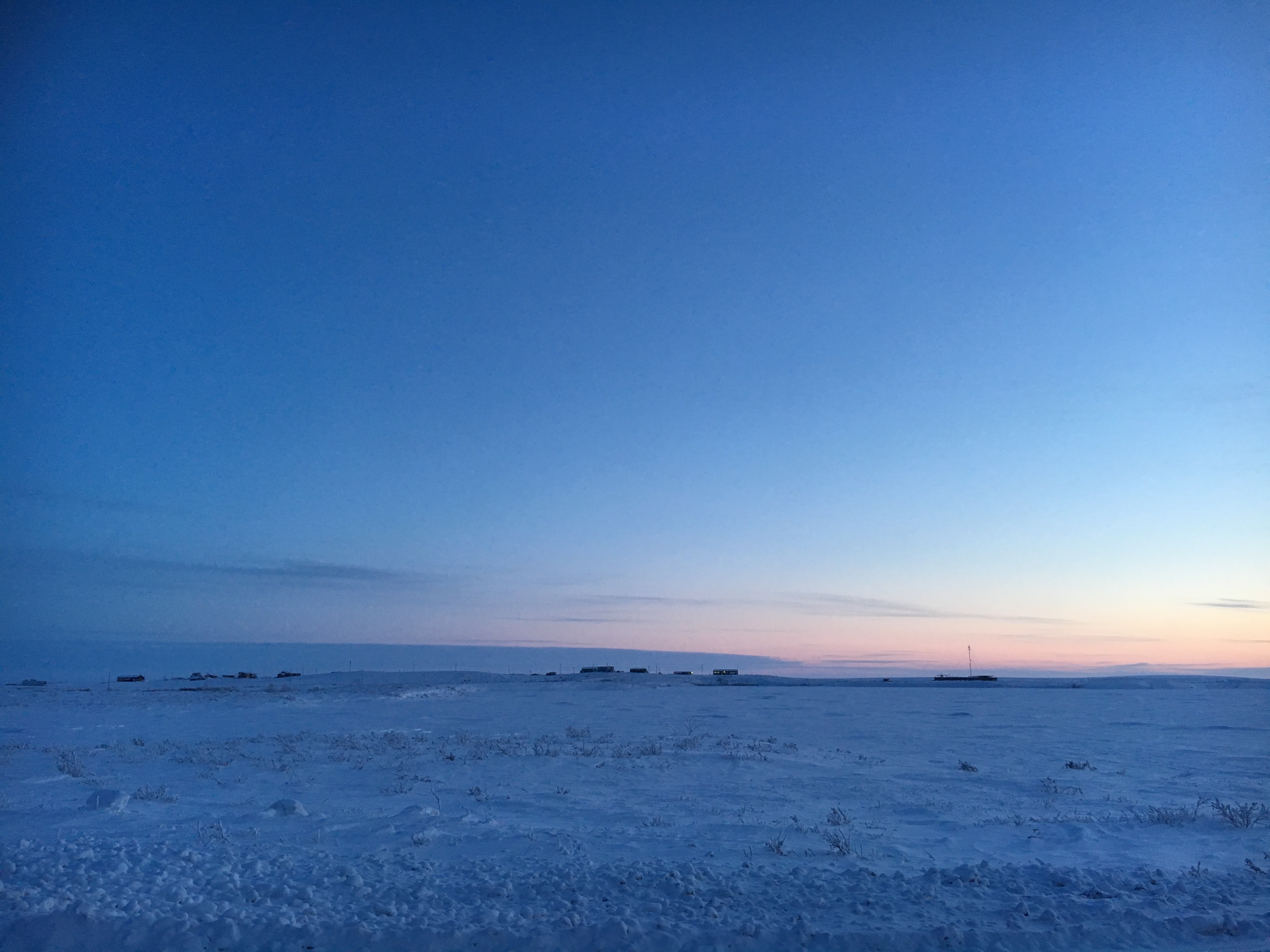 In Tuktoyaktuk, we visited and toured a local school, took a stroll on the frozen Arctic Ocean, climbed a pingo and bought some souvenirs before heading out back to Inuvik. We also managed to do “tea toss” as we stopped a few times heading back to the hotel. 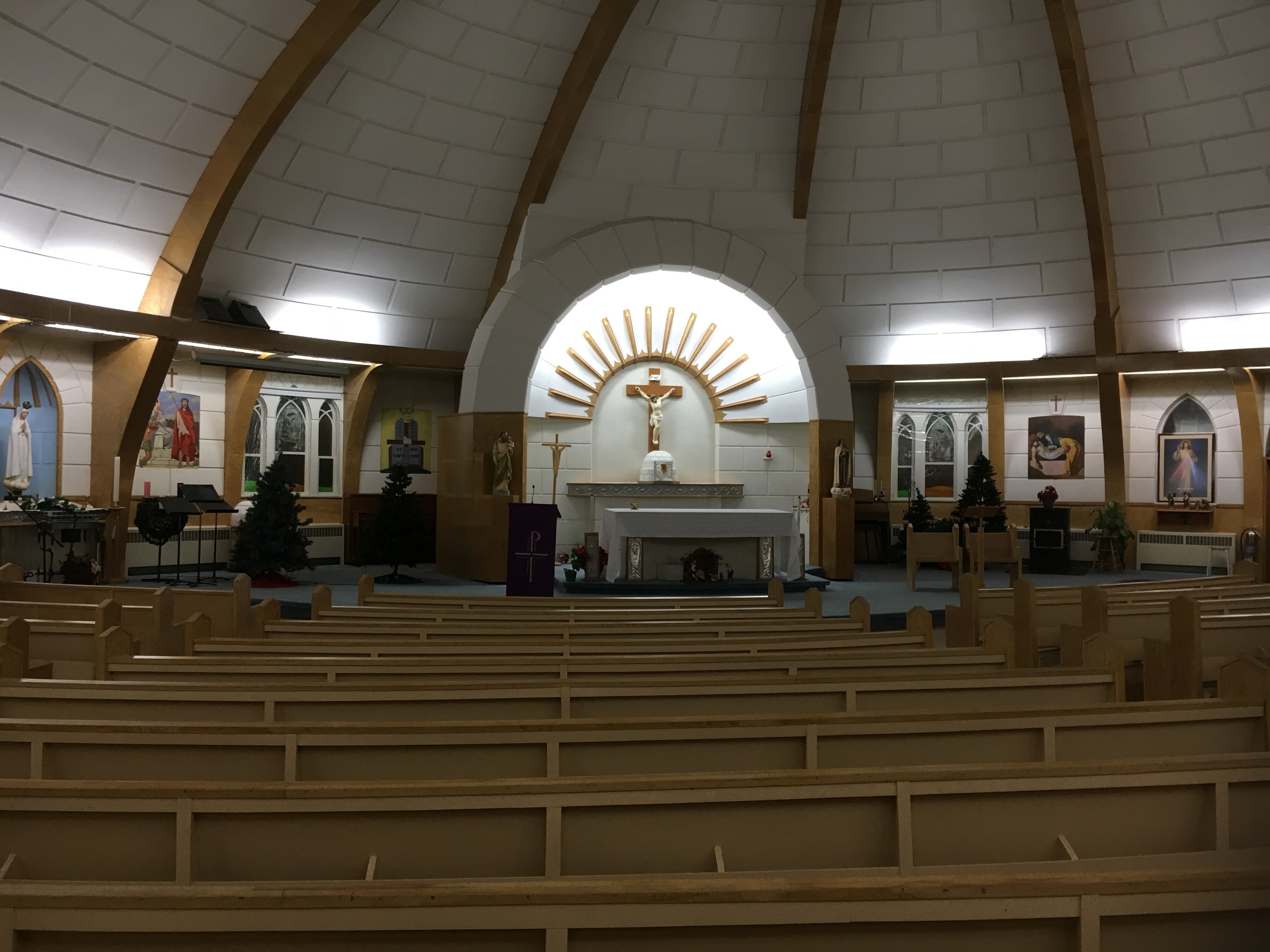 Our last day was an exploration/shopping in Inuvik day. We did manage to go and see their Igloo Church – Catholic Church in the shape of an igloo.
As we boarded the first of our four flights (all operated by Air North) to get back to Vancouver via Whitehorse, Dawson City and Old Crowe, we left Inuvik with happy memories of Northern Lights and great people and with a hope to be back sometime soon. And can I just say – Air North rocks! Their customer service was outstanding.

Video showcasing some of the great memories: