About Australia Adventure
A visit to Australia is similar to a visit to Canada - the country is vast and there is so much to see. Once you are comfortable driving on the left side of the road most of the traffic navigation is easy.
City stays are easy, with plenty to see and do. Compact enough that you can get in many steps while covering a lot of sights and attractions but not feel overdone. Brisbane was my favourite city, as it was not as intense as I felt in Sydney. Everyone was in a hurry and the streets were narrow in Sydney.
In hindsight, I wish we had rented a car and driven the 11 hours along the coast. I think we would have had a more relaxed time of it and stumbled upon a few more treasures away from the hustle and bustle of the cities.
For our trip, we focused on the East Coast Cities – Melbourne, Sydney and Brisbane. All are serviced by Air Canada. We used a regional carrier for the domestic flights to give us some more time in each city. 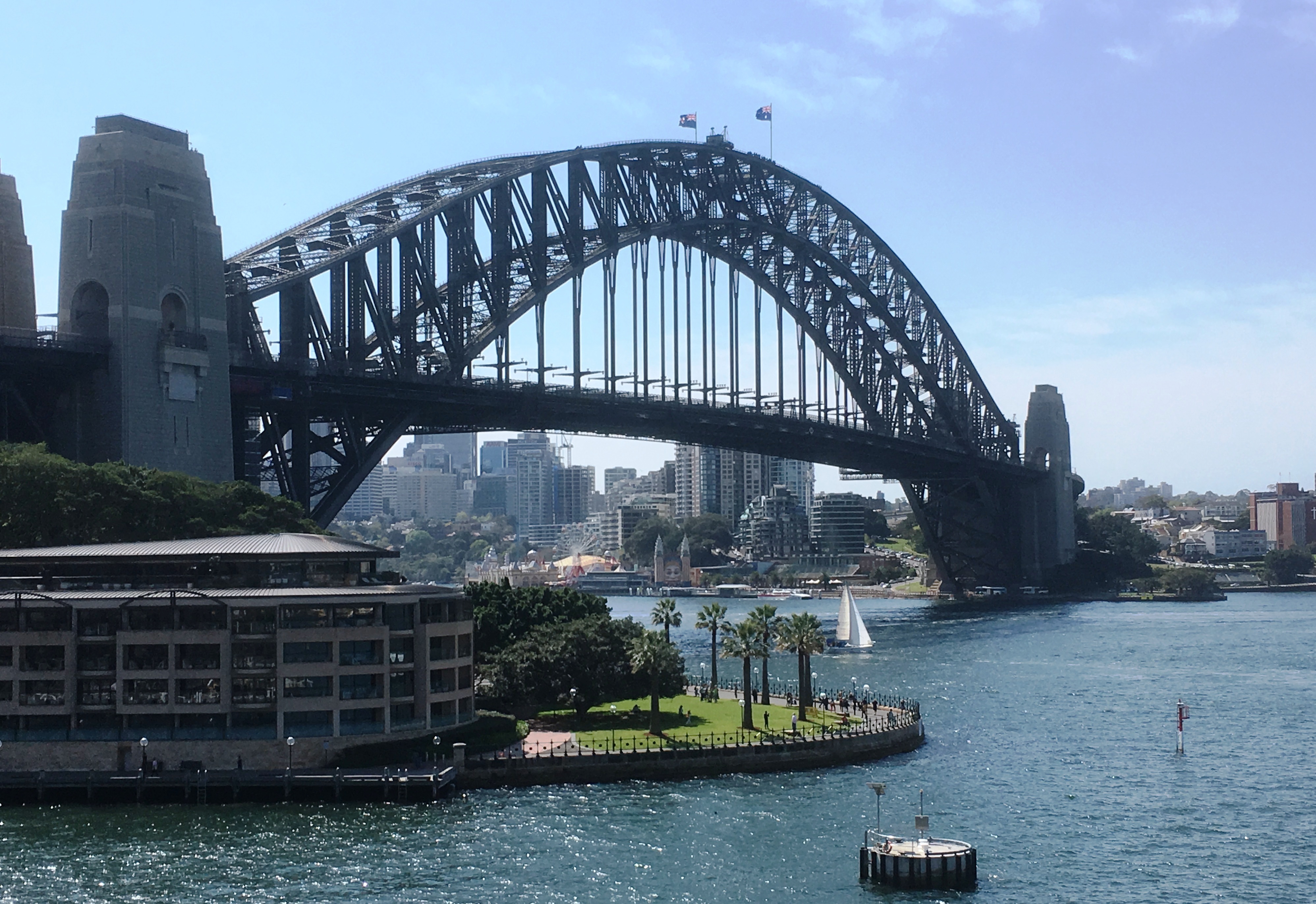 Transportation
Melbourne’s The Free Tram Zone extends from the Docklands harbor over to Queen Victoria Market and then Flinders Street station to Federation Square. Ride Route 35’s City Circle for free. If you ride the entire route the trip will take you an hour complete with an audio tour that highlights Melbourne’s attractions and history. Hop on an off as you like to explore the city including such sites as Fitzroy Gardens, the State Library, the Greek Precinct, Chinatown, the Immigration Museum, Old Treasury Building Museum and Queen Victoria Market.
Melbourne has two airports. Tullamarine is the primary airport but if you’ve elected for the low-cost carrier JETSTAR for a domestic trip you are going to depart from Avalon. We heard a few surprised international travellers didn’t realize the difference between the two. They are located 45 minutes from each other, so double-check your itinerary before you leave for the airport.
Sydney’s transit card is called the OPAL. Like the Vancouver Compass card, the OPAL card can be loaded in 10.00AUD increments and away you go tapping on and off transit, including trains, buses and ferries, with your fare measured by the distance travelled. However, on Sundays, the maximum fare for the entire day is currently 2.50AUD/person.
Favourite town/favourite food
My favourite town was Montville, a charming town filled with iconic Queenslander buildings. Located 66 miles from Brisbane, this town is located in the hills of the Sunshine Coast’s Hinterland. 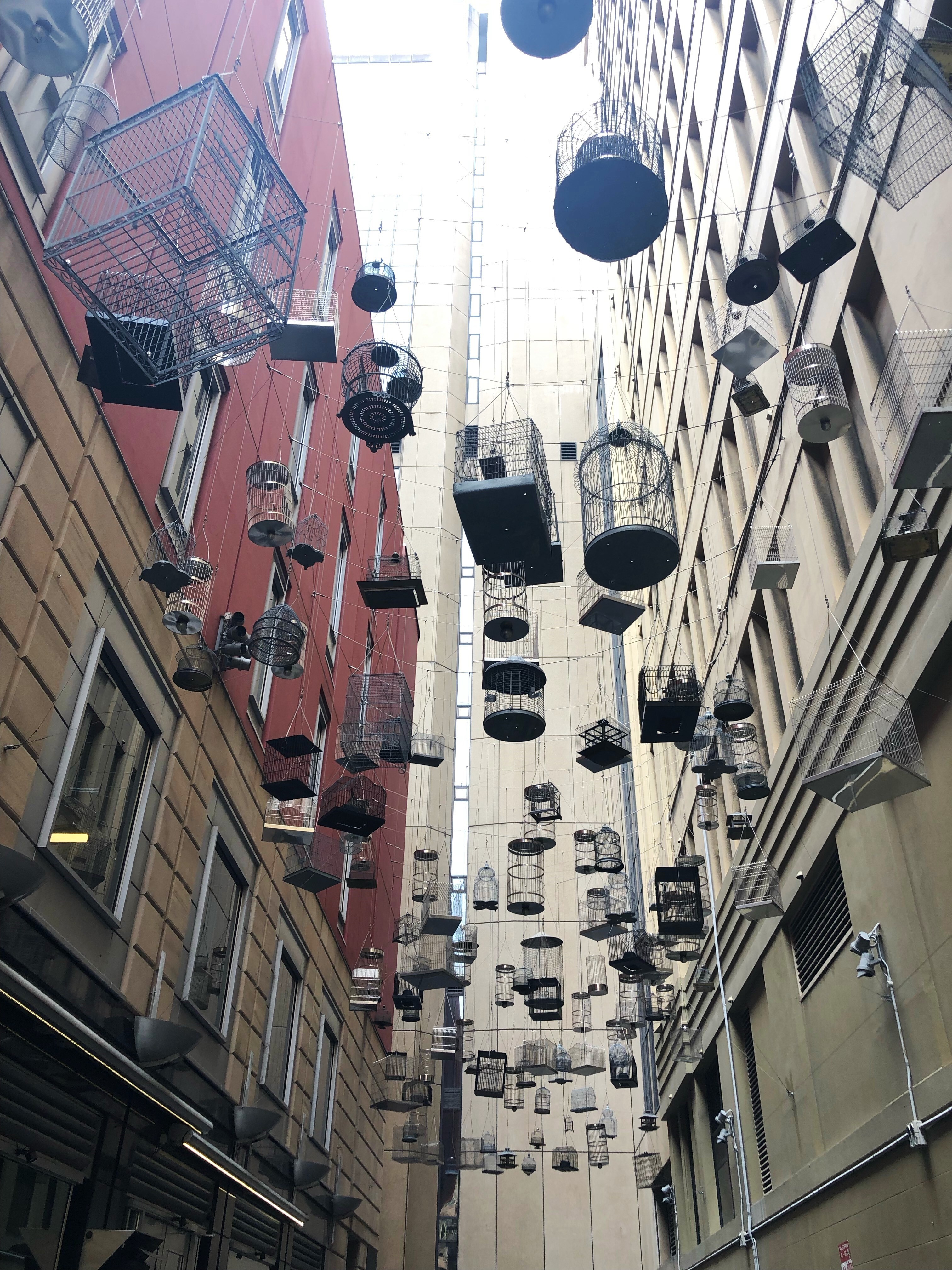 Filled with restaurants, art galleries and a wide variety of accommodations, you can enjoy some amazing vistas of the rolling hills of the ranches and vineyards in the area. And if you are a fan of fudge, you must consider a stop at Fudgyboombahs, with more than 70 varieties of the sweet, located on the main street.
Lamingtons or Lamington Cake is a dessert that the Australians identify with much like British Columbians identify with the Nanaimo bar. Uniquely local. So glad our hostess Bridget and her family in Brisbane introduced us to the treat. A lovely light sponge or butter cake, depending on your favorite family version, cut into squares and dipped in a chocolate glaze and rolled in desiccated coconut, they were a lovely and light treat that isn’t too sweet. 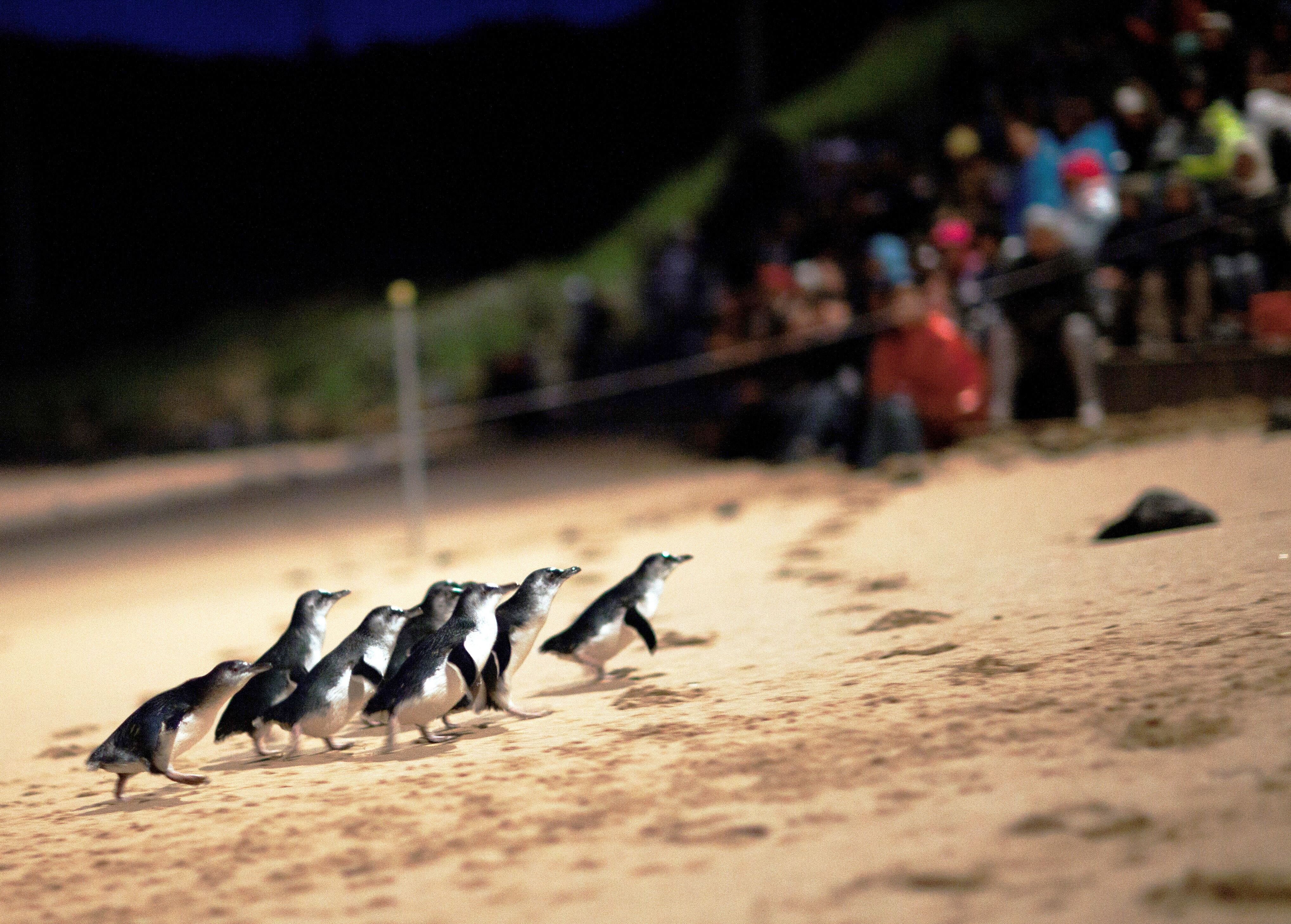 A bucket list excursion for me was to visit Phillip Island and see to view the nightly migration of the world’s smallest species of penguins. We elected to leave the driving to someone else so we could enjoy our adventure though the trip is only 90 minutes from Melbourne. By taking the motorcoach tour we were able to sit back and take in the countryside and learn more from our professional guide and driver, not just about Phillip Island but more about Australia and specifically the Victoria region. 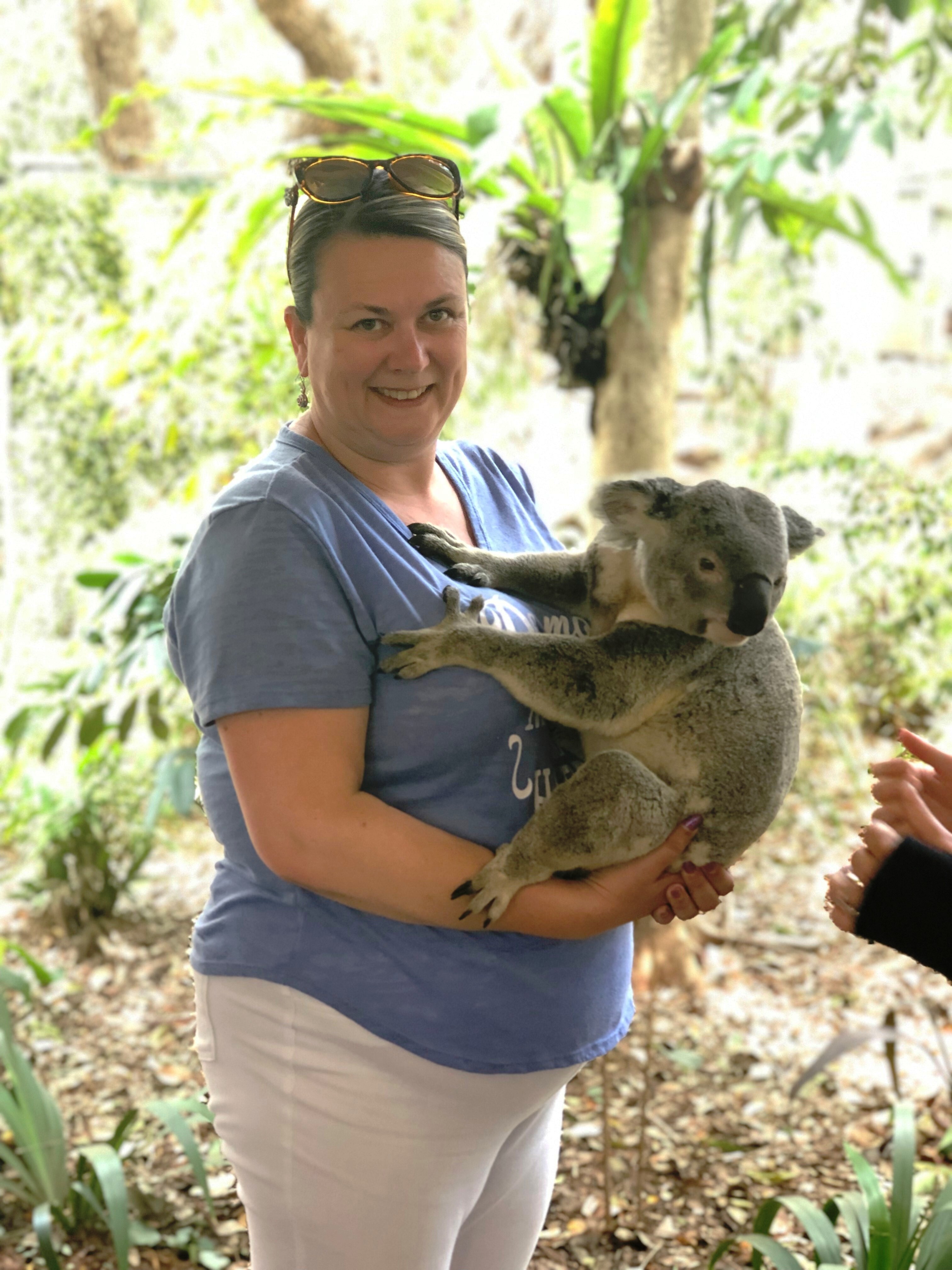 Along the way, we stopped at Maru Koala & Animal Park where we were able to visit and feed the kangaroos and emus as well as view the koalas. Personal pictures can be upgraded at most of the animal parks. Most koalas in the animal parks and zoos have been rescued or breed in the facilities as their natural habitat continues to shrink. Sadly the concern is that they may not continue to survive in their natural habitat. 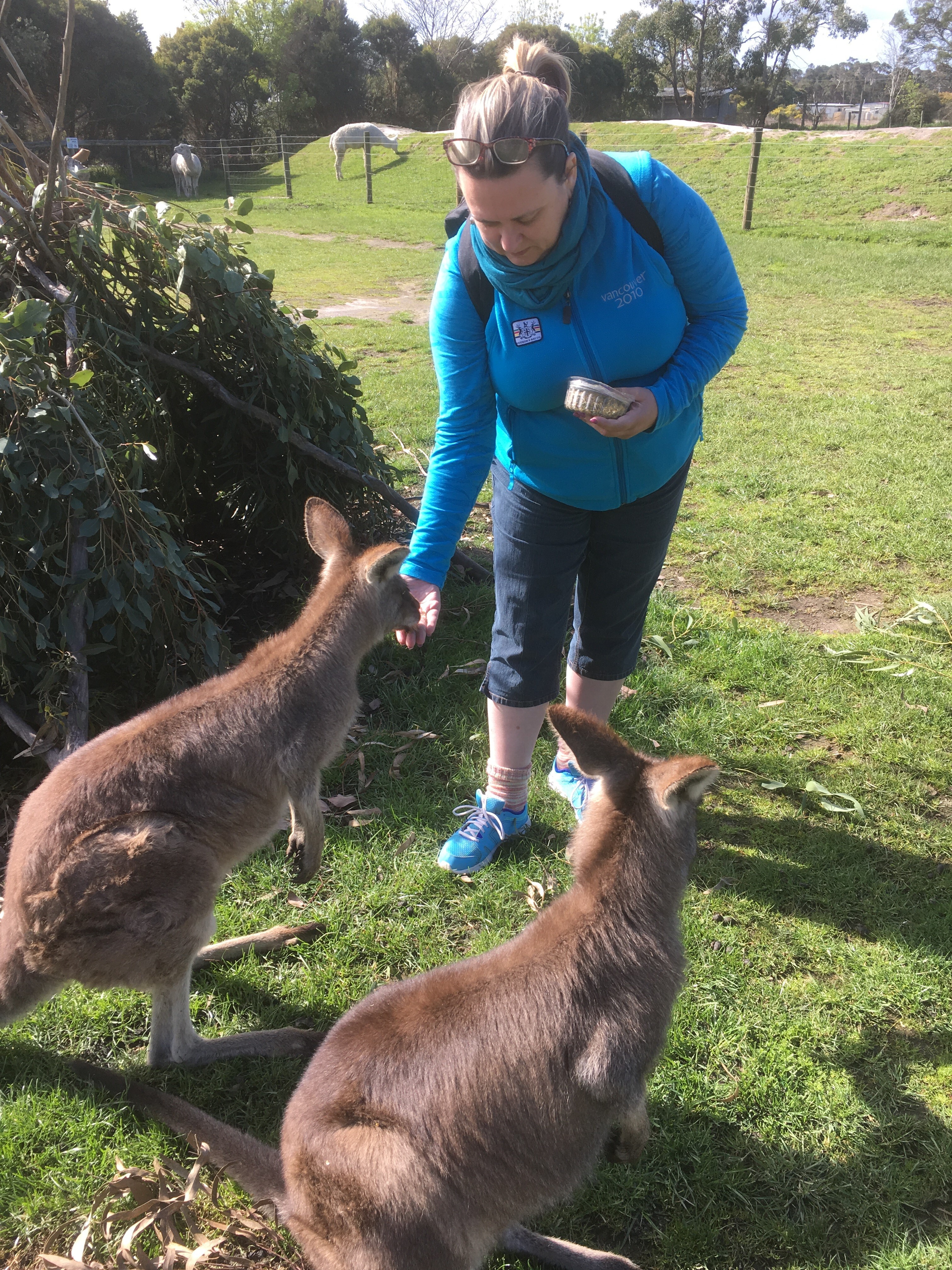 Once we arrived at Phillip Island, we joined the upgraded Guided Ranger tour which included binoculars and a personal headset with the ranger’s commentary for the tour of the colony. And our perch on the ranger bleachers at the edge of the beach allowed for a much closer view of the migration. From our seats, we were treated to a very close view of a couple wee ones looking for mum and dad to return with some nourishment.
Bundle up though, as you are at the ocean shore at sunset so the temperatures can drop quickly, depending on the season.
Tour #2 (Melbourne)
On our agenda was Melbourne’s Sports Lovers Tour. Melbourne’s rich sporting love and history has resulted in it being named the Sports Capital of the World. We visited Flemington Race Course and saw the preparations for the Spring Racing Carnival and The Melbourne Cup. The latter is the race that truly stops the nation. We heard stories about some of the legendary winners, including Phar Lap, Carbine & Makybe Diva.
Along the way, we toured the Commonwealth Athlete’s village from 2006, saw tennis’ Rod Laver Arena, Marvel Stadium and drove the F1 Grand Prix course… well, most of it… if even if the traffic lights were back in service.
On to the Melbourne Cricket Grounds (MCG) for a behind, the scenes look at the venue and learn more about the passion and culture that are the sports clubs of Australia. Our guide at the MCG has been a member for more than 50 years. The venue hosts cricket matches and also Aussie Rules Football, which was developed out of the state of Victoria. We were in town as the AFL Grand Final approached. If you are a sports enthusiast, the Grand Final match is generally held on the last Saturday in September if you obtain some tickets to join the locals.
Tour #3 (Brisbane area)
While our trip didn’t let us get up to the Barrier Reef, this less than sea savvy traveller was happy to find a more sheltered experience on Moreton Bay, just outside Brisbane. We had a beautiful day out with the catamaran operated by Aria cruises to Peel Island. Teerk Roo Ra National Park is located on Peel Island in the bay in close proximity to Stradbrook Island. We had a very relaxing day out on the boat and the shelter of Moreton Bay worked well for this sea cautious traveller. The crew was professional and helpful and we docked just off the shore and they offered us a tender to the shore of Peel Island. Here we waded along the shoreline and explored the tidal pools. We also saw a few dolphins feeding along the shore for a very up-close experience. Easy swimming and fun was had by all. And we didn’t feel we were in the crush of the tourists which you might find in the more popular beaches. Australia boasts many hidden treasures and islands so consider exploring a little more along a road, or beach, less travelled.
Best time to travel
The warmest time to travel is December through February though if you travel in February, you will find that you miss the school holiday breaks. 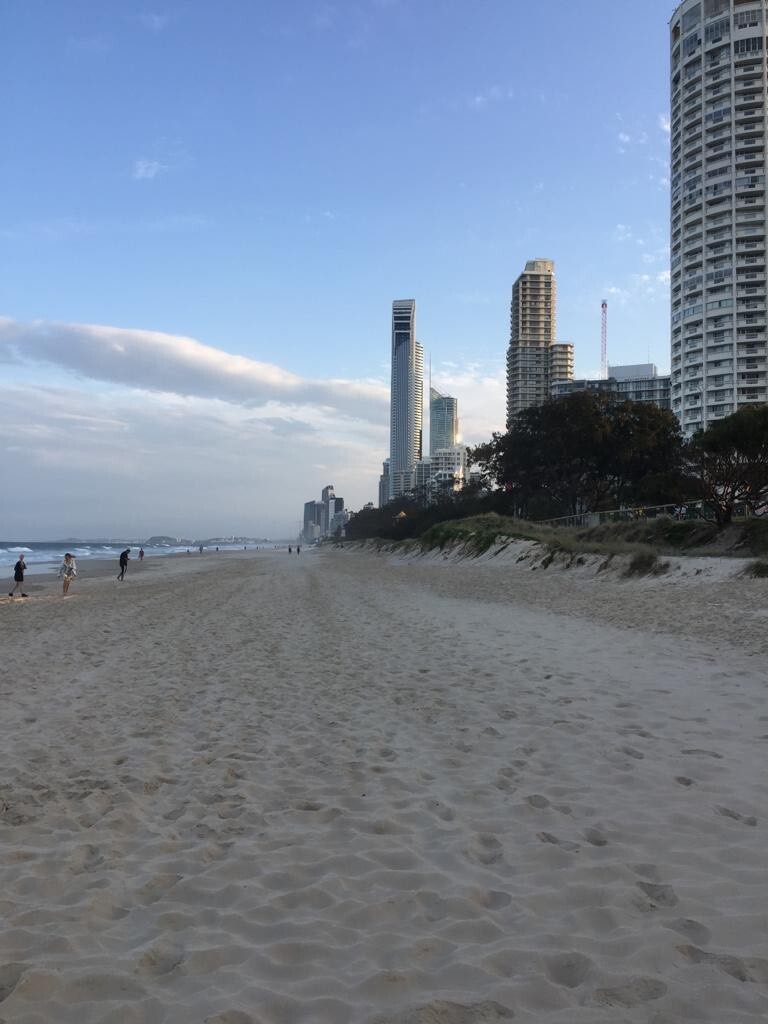 We visited in late September, their early spring, and found it to be quite nice. Melbourne was cool and bright with temperatures ranging from 8-15C while we were there. Sydney is just over an hour flight north and day times we found the temperatures between 20-25C and through the night it was about 12-15C. Brisbane is another 90 minutes flight further north and has a much more steady temperature and the temperature when we visited ranged from 23-30C.

If you enjoy the spring blossoms consider September through October before it gets too warm. Magnolias, Poinsettias, and the Jacaranda with its stunning purple blossoms, that give the view a unique warmth. I didn’t get to capture an image as we were leaving just as the blooms were opening on the trees.